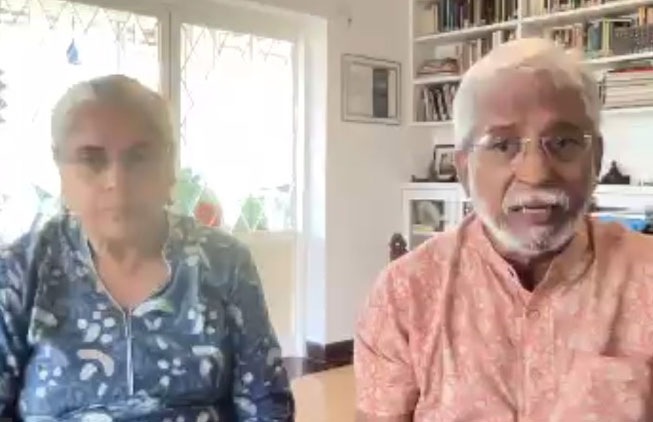 A two-day online workshop was conducted on 29th and 30th November 2021 as a part of Documentary Filmmaking course at the School of Mass Communication, KIIT Deemed to be University. The workshop was conducted by Prof. Anjali Monteiro and Prof. K. P. Jayasankar, former professors and deans of School of Media and Cultural Studies, Tata Institute of Social Sciences, Mumbai.

Documentary films by Prof. Monteiro and Prof. Jayasankar have been screened across the world, winning 33 national and international awards. Their most recent awards for their Kachchh Trilogy are the Basil Wright Prize 2013 for So Heddan So Hoddan (Like Here Like There) and Jury’s commendation in the Intangible Culture category 2019 for A Delicate Weave at the Royal Anthropological Institute Festival, UK. They are also the author of A Fly in the Curry — Independent Documentary Film in India, Sage, 2016, which has won a Special Mention for the best book on cinema in the National Film Awards, 2016, and DigiNaka: Subaltern Politics and Digital Media in Post-Capitalist India, Anjali Monteiro, K.P. Jayasankar, Amit S. Rai (Eds.), Orient Black Swan, 2020.

The workshop was modelled to review the first drafts of student documentary films by the resource persons. There were a total of seven student films which were reviewed and detailed inputs were provided to work on the narrative and aesthetics of the films. The resource persons also covered a module on scriptwriting, mise-en-scene and ethics. The film So Heddan So Hoddan (Like Here Like There) by the resource persons was also screened as a part of the workshop, followed by a discussion.

The workshop saw full participation from the students, much of which was interactive. The resource persons were highly impressed with the works of the students and appreciated their active participation.