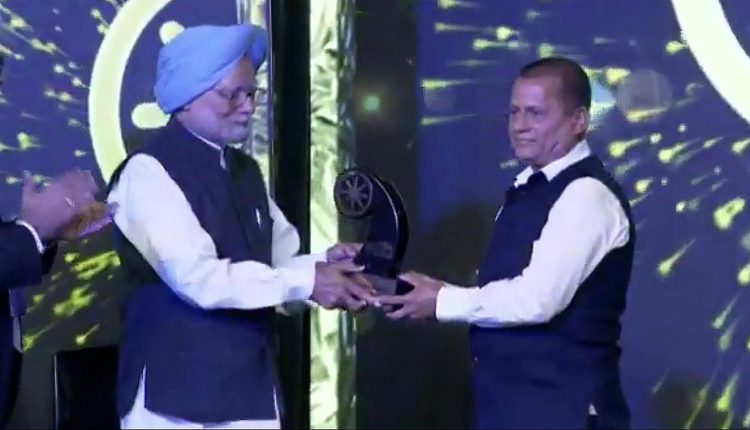 Dr. Achyuta Samanta, Founder, KIIT and KISS has been awarded with BusinessLine Changemaker Awards 2019 instituted by The Hindu BusinessLine, the leading business daily published by The Hindu Group. Dr. Samanta from Odisha was awarded and felicitated by Dr. Manmohan Singh, former Prime Minister of India at an awards function in New Delhi on March 15, 2019. The winners, across six categories of awards were also felicitated and awarded. Among others Mr. Arun Jetly, Finance Minister of India for GST and Bezwada Wilson, Founder, National convenor of Safai Karmachari Andolan for radication of inhuman and in dignified practice of Manual scavenging.

The award focuses on recognizing and celebrating people and organisations, who through their ideas and actions, have brought about positive change in our society. Dr Samanta won the award as change maker for social transformation because of relentless efforts in improving the condition of the society and the indigenous community and his years of dedication in reducing the number of people living in hunger, poverty, illiteracy and unemployment. Among 600 nominations, he made it to the award through selection by an eminent independent jury after an elaborate process that began with the seeking of nominations, rigorous process of scrutinizing and short listing them based on select parameters, and finally, jury selection.

The Changemaker Awards from Businessline have been recognised by industry leaders as the most credible awards, with an extremely rigorous and independent selection process. The award reflects that Dr. Samanta has been able to touch lives and it also evinces that so many people put their valuable trust in him.

Expressing his pleasure over getting the award, Dr. Samanta said, “I accept this honor with a profound sense of gratitude on behalf of all our stakeholders. This recognition has further enthused us to rededicate ourselves in the service of children, the torchbearers of tomorrow. It first started with transformation of my own life and surroundings followed by transforming lives of the deprived, downtrodden and destitutes” added Dr. Samanta on receiving the award.

KIDS Faculty Conferred with Young Achiever of the Year Award