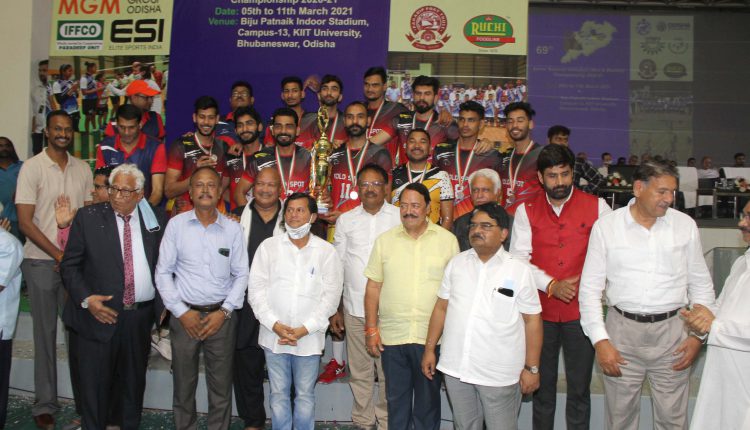 The 69th National Volleyball Championship Will Be Remembered Forever

The 69th National Volleyball Championship (Men & Women)-2020-21 held from 5th March to 11th March 2021 at Biju Patnaik Indoor Stadium, KIIT was undoubtedly a whopping success. Such a Mega Event will be remembered forever in the history of Indian Volleyball. From various aspects, the Mega Event was exceptional. In the midst of Covid Pandemic, it was an event of significance not only for KIIT but also for Odisha which was organized with clinical precision.

More than 1200 men and women players and officials from 28 States and 8 Union Territories of India had taken part in this Mega Championship. It was also for the first time in the history of the Volleyball Game in India that, one state in general and one Institution, in particular, hosted 2 Senior-Level Championships, which has been a record by itself. Moreover, for the first time in the history of Volleyball in India as many as 30 teams in Men’s category and 28 teams in the Women’s category participated in the Mega Event, which was never seen before in any of the Senior Level Championships.

The elegant Biju Patnaik Indoor Stadium at KIIT hosted day and night matches in all its 4 flood-lit Volleyball Courts. Though matches were being played till late in nights, still fervor among the players and officials gained momentum. Following restrictions due to persisting Covid pandemic, there was no scope for the common audience to witness the match, but that couldn’t deter the players’ tempo to perform to their best.

Another notable fact about this Mega Volleyball Championship was the declaration of cash prizes for both the Champion and Runners-Up team for the first time in annals of Indian Volleyball. “For the coming 20 years, cash prizes will be conferred upon the Champions and Runners ups for the Senior Volleyball teams”, declared Dr. Achyuta Samanta, President of the Indian Volleyball Federation. Both men and women teams will get 51000 (fifty-one thousand) and 31000 (thirty-one thousand) towards the prize money respectively, he said. While KISS Deemed to be University will contribute the cash prize for the Women’s team, KIIT Deemed to be University will donate the same for the Men’s team, added Dr. Samanta.

Remarkably, the 69th Championship will be remembered for another reason and that is for the first time the Odisha Volleyball team entered into Quarter Finals after a long gap of 25 years. Both Men’s and Women’s teams of Odisha had played superbly to bring glory to Odisha. As Dr. Samanta has a special penchant for Games  & Sports, he has been working consistently to build state-of-the-art sports infrastructure at KIIT & KISS for the last 16 years. It is only due to his untiring endeavor, adequate ultramodern sports facilities and infrastructure have been developed here at KIIT & KISS. Besides more than 5000 National and International level sportspersons have been groomed from KIIT & KISS due to Dr. Samanta’s effort. In the process, KIIT & KISS earns the unique distinction of having enormous Sports Facilities and infrastructure in India being an educational institution.  By virtue of its ample sports infrastructure, numerous National and International events are held throughout the year. Prior to the onset of the Covid-19 Pandemic in India, all India Universities level ‘Khelo India’ Games was successfully organized at KIIT.

After adorning the office of the Volleyball Federation of India as its President, Dr. Samanta has taken an all-out effort to popularize Volleyball in every nook and corner of India, especially in remote rural pockets. To promote rural Volleyball prodigies, Dr. Samanta has provided sports kits to players and established Floodlit Volleyball Courts including 5 of those in Kandhamal Parliamentary Constituency recently. Besides, he has started taking productive measures in different states of India for the popularization of Volleyball. He has been trying his best to ensure the Sportspersons of Odisha to excel in different National and International level sports events. Scores of Volleyball Players and fans are now confident on Indian Volleyball Team will achieve new heights of excellence at the global arena by dint of the visionary leadership and guidance of Dr. Achyuta Samanta.

KIDS Faculty Conferred with Young Achiever of the Year Award