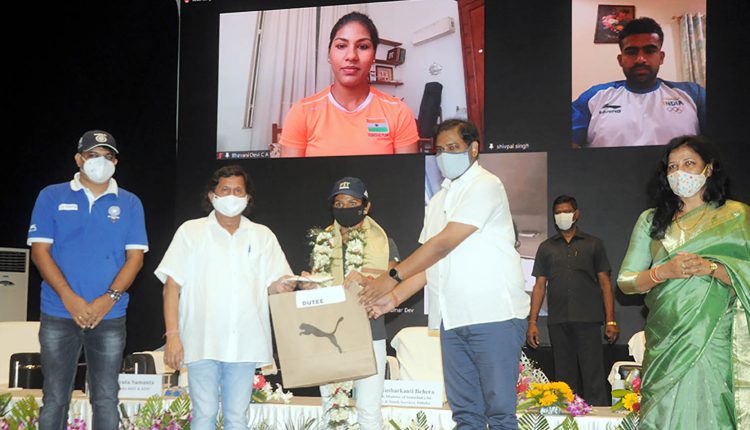 In a remarkable feat, three athletes – Dutee Chand, C. A. Bhavani Devi and Shivpal Singh – and Dr. Sudeep Satpathy, a sports medicine doctor, from KIIT Deemed to be University have made the cut for the forthcoming Olympic Games. KIIT is the only university in India to send three athletes and one official (doctor) to the Tokyo Olympic Games, which is scheduled to start from 23rd July 2021, informed Dr. Achyuta Samanta, Member of Parliament (Lok Sabha) and Founder, KIIT & KISS. Interacting with the journalists at a national virtual press meet in Bhubaneswar, Dr. Samanta said, KIIT and KISS have been able to achieve such unique distinction as they have been promoting sports and games in a big way among the students since their inception. Remarkably, KISS has produced 5000+ sports talents at the state, national and international levels, who include medal winners for the country at international sports meets like Commonwealth Games, Asian Games and World University Games. Many KIIT students have also brought glory for the institution, state and country by their performance at various national and international games.

It will be the second consecutive Olympic appearance for Dutee Chand, a law student at KIIT, who qualified in two events – women’s 100m and 200m sprints – on the basis of her world ranking. An Arjuna Awardee athlete and national record holder in 100m with a time of 11.17s, the highlight of her career is winning two silver medals in 2018 Asian Games. She is the only Indian to participate in two events for two times in Olympics, Dr. Samanta added.

C. A. Bhavani Devi, who is pursuing Ph.D. degree at KIIT, is the first Indian fencer to ever qualify for the Olympics. She secured qualification in the women’s sabre event at Tokyo 2020 Olympics through the Adjusted Olympic Rankings, following the World Cup in Hungary on 14th March 2021. Ranked 42nd in the world, she made history by becoming the first Indian to win a gold medal at the Senior Commonwealth Fencing Championship in Australia in 2018 in the sabre event.

Javelin thrower, Shivpal Singh, a BBA student at KIIT, qualified for his maiden Olympic Games by breaching the qualification mark with a throw of 85.47m at the ACNW League Meeting in South Africa on 9th March 2021. The throw also earned him the Gold Medal at the event. He will represent India along with star javelin thrower Neeraj Chopra.

In another proud achievement for KIIT, Dr. Sudeep Satpathy of Kalinga Institute of Medical Sciences (KIMS) has been selected as the Doctor of the Indian Men’s Hockey Team for the Tokyo Olympics 2021. A specialist in Clinical Physiology including Sports & Exercise Physiology, Dr. Satpathy has numerous Olympic involvements in the past, including Sports Medicine Doctor in Rio Olympics 2016 polyclinic and Athletes Park, looking after emergency and sports medicine clinics.

On this occasion, Dr. Samanta declared two important gifts for Dutee Chand, which will be presented to her after her return from the Olympics. Dr. Samanta said, KIIT and he personally have been with Dutee during her good and bad time from 2013 will be with Dutee in the future also. Dr. Gaganendu Dash, Director-Sports, KIIT introduced the athletes, sports lovers and staff of KIIT & KISS joined the ceremony in large numbers.