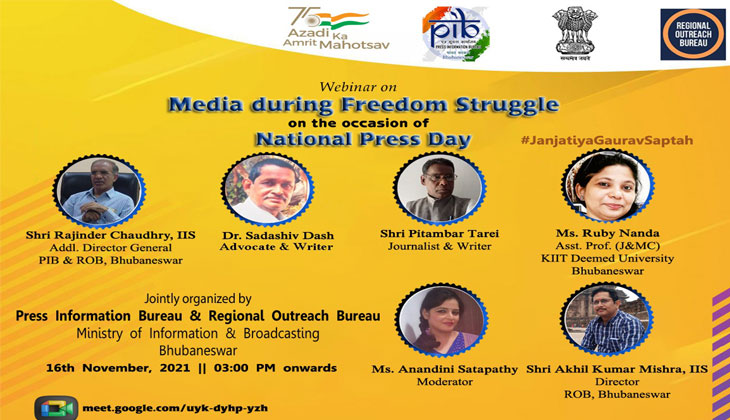 Ms. Ruby Nanda, Assistant Professor, KIIT School of Mass Communication (KSMC) was invited as a Guest Speaker at a webinar organised by the Regional Outreach Bureau, Press Information Bureau (Bhubaneswar), Ministry of Information & Broadcasting, Govt. of India on 16th November 2021, on the occasion of National Press Day. Speaking on the topic, ‘Media during Freedom Struggle’, she gave a call to do away with the scourge of fake news and urged the press to work with the same spirit as during the freedom struggle.

Recounting the immense contribution of the media in the freedom struggle, she said, for good journalism to flourish there is a need for the public to appreciate and encourage good journalism. “Social media is user generated content and cannot be compared to the information provided by the media”, she said in her reply to a question by Ms. Anandini Satapathy, Anchor, Doordarshan & event moderator.

Speaking on the occasion, Mr. Rajinder Chaudhry, Addl. Director General, ROB & PIB, Bhubaneswar expressed concern on how easy it was to create unrest and communal tensions through social media. He made the public aware about the newly-launched “PIB Fact Check” service made available to journalists. Dr. Sadashiv Dash, eminent writer and advocate provided a kaleidoscopic overview of the freedom struggle in Odisha and the role of press. Well-known poet and Odisha Sahitya Academy awardee Mr. Pitambar Tarei, journalist and writer spoke about the freedom of press and the deep commitment the press had during the freedom struggle.